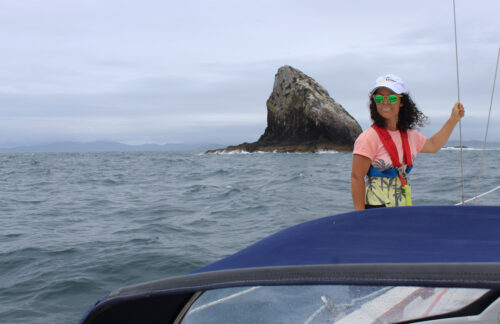 On Thursday, when ‘Nissa joined Kokako, sunny skies and fair winds beckoned so we were both eager to put to sea. The coastal voyages give us total liberty to sail anywhere in the Bay of Islands, so I decided to head to Whale Bay via Kent Passage and the Keri waterway, as I’ve heard the locals call the passage along the north coast of Moturoa Island. An evening swim rounded out a wonderful first day sail of 10 miles.

Our rolly anchorage kept our seasickness at bay and set us up for a 17-mile passage north along the coast to the Cavalli Islands where we chose the larger of the two sheltered bays for the evening. As ‘Nissa was a “new” sailor I did not want to push her comfort level so I gave her the option of circumnavigation the Cavallis then returning the next day to the BOI or sailing 12 miles further north to Whangaroa. ‘Nissa jumped at the opportunity to extend her sailing and promptly began the necessary navigation. On our departure, after a few morning rain squalls, the wind gods smiled on us and we had a delightful eased sheet sail to Flat Island. We’d sighted a hammerhead shark and another large shark fin so were thrilled when three frisky dolphins entertained us for 45 minutes on our next course to Whangaroa harbor. 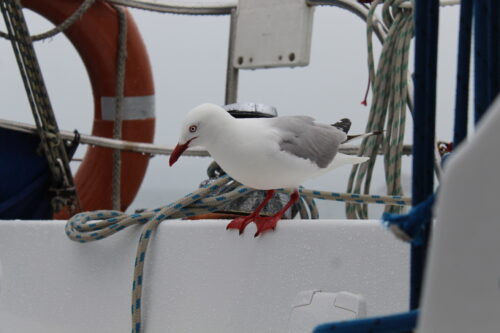 The narrow cliff entrance to Whangaroa is always interesting and ‘Nissa navigated its rocky sides like a pro. We chilled out in our calm anchorage, dinning on fresh caught snapper and harvested oysters, while feverously getting ‘Nissa up to speed with the intricacies of sailing. A double circumnavigation of Peach Island offered a first-class challenge as we encountered 5 different wind directions and wind speeds from 0 to 30 knots due to the williwaws. A cheeky seagull often rode so we decided he must be our mascot and named him “Rusty”.

With a storm forecast threatening New Zealand it was prudent to high tail it back to the bay and we were the only boat anchored at Marsden Cross for the night. In order to complete NZ Yachting Level 2 certification, in addition to having now completed 100 miles, ‘Nissa also needed two hours night sailing. We departed Marsden Cross at 3 am under reefed main and headsail and completed our night sail at Motuarohia Island with a massive pancake breakfast which we shared with a buddy of Rusty. By now we were out of chocolate and as the weather was seriously deteriorating we thought it best to head back to base. 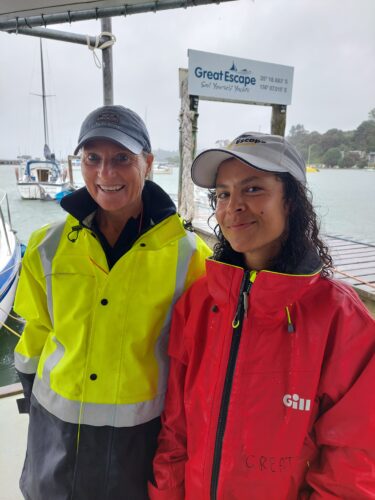 Damp but happy after a successful Coastal Voyage

Gybing around Tapeka Point in the forecasted 25 knot plus winds did not seem appealing so we decided to cruise home under full headsail only to be gutted when we were greeted with no wind at Russell. After motoring the final four windless miles home we were smacked with lashing rain and gale winds a few seconds after we picked up Kokako’s mooring which certainly made offloading a spirited exercise. A damp wrap up with “Julie Boss” completed Coastal Voyage #2 and ‘Nissa departed with serious thoughts on buying her own yacht on which to continue her sailing adventures. Or maybe a few more charters with Great Escape!