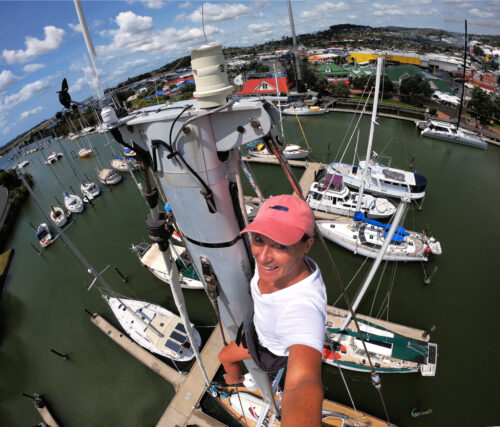 “Sailing offers you the freedom to color-outside-the-lines”

Amanda’s love of sailing began at the age of five as movable ballast down below on her parent’s homebuilt Hartley 16. In 1976 Amanda helped her parents build Swanhaven a 50ft Bruce Roberts. After a sailing season in the South Pacific, they then built Swanhaven II, a 39ft Mummery which they sailed to Canada. As a teen, Amanda embarked on a trans-Tasman career in the yachting becoming a qualified sailmaker and professional rigger while racing and coaching.
In 1988 Amanda joined Maiden and completed the Whitbread Around the World Race as rigger and crew. From 1994 -2020 she co-conducted offshore sail-training expeditions aboard Mahina Tiare III, a Hallberg Rassy 46, with highlighted expeditions from Antarctica to Svalbard, and Australia to Iceland via the South Pacific, Alaska, Panama, Caribbean, and the Mediterranean.
Amanda’s 348,000 offshore sea miles include Sydney-Hobart races, international regattas, offshore races, and seven roundings of Cape Horn intermixed with a ten-year involvement in race coaching and sailing as Mate on Spirit of Adventure/New Zealand tall ship sail-training voyages.